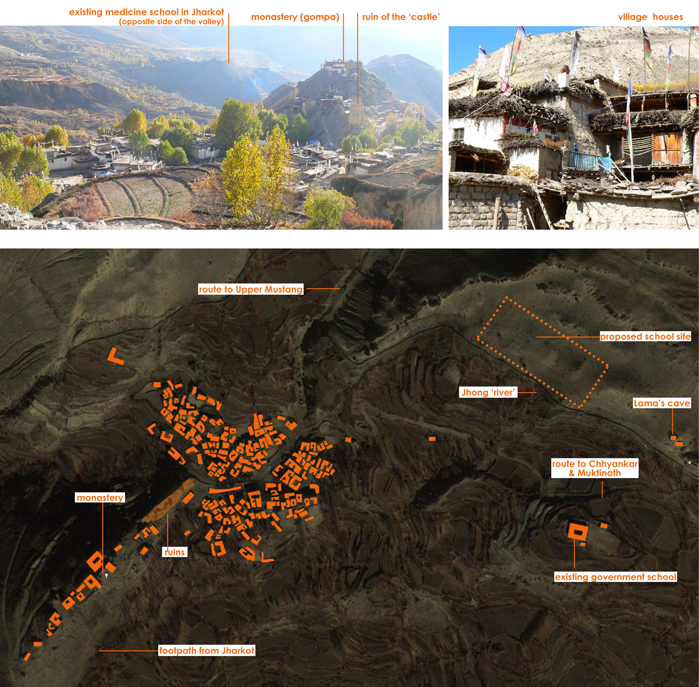 Many locals believe that the village Jhong (or Dzong: the word means ‘fortress’) was established about 550 – 650 years ago. It is situated at the foot of a steep ridge, which is crowned by the impressive ruins of the old fortress, where the local king once resided. Aside of the fortress you can find the still very lively and beautiful old monastery with its Sakya gompa (buddhist temple), which is one of the oldest, largest and most devotedly cared for in the region.

The monastery provides incredible views across the valley to the villages of Kingar, Jharkot and Purang as well as to the pilgrimage site of Muktinath and its hotel settlement of Ranipowa.

The Dhaulagiri and Nilgiri mountain ranges tower high above the area. To the East is the Thorung La pass, the highest point of the Annapurna circuit (5416m).

In Jhong you can also find a small state school, a health post and 3 guesthouses of basic standard.

The population is approximately 300 people.

Economics: Tourism mainly benefits the hotel owners, especially in Ranipauwa. Most villagers practise a primitive system of farming in a low quality, small area of land, hardly producing enough for their own needs (barley, buckwheat, potato and seasonal vegetable). Due to recent access to a road, some people have started to cultivate more apple, potato and poplar trees because of their high demand in the lower towns.

Approximately 20% of the population is involved in livestock farming, another 20% are involved in winter garment sales in India (North/Eastern part of India).
An interesting statistics showed that about 70 – 80 % of the families have someone working abroad (America, Japan, India and Europe) to financially aid their family.

The Medicine school’s ultimate aim is to preserve Tibetan medicine and culture by offering an alternative education to the government school. Currently they can only grant scholarship to 21 students and many children had to be turned away due to lack of space. With a larger, and more purpose built school they could almost triple the numbers of students.